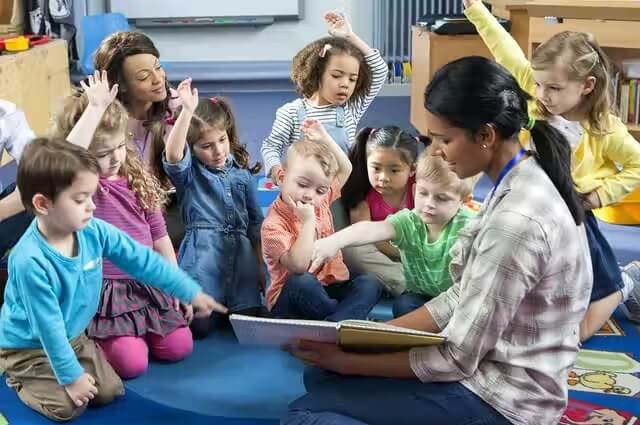 Early childhood education and care is facing serious staff shortages in Australia. Thursday’s announcements by the New South Wales and Victorian governments that they will provide an extra year of education for three-and-four-year-olds (by 2030 and 2025 respectively) will only add to these pressures.

These multibillion-dollar commitments are in addition to the new federal government’s plan to reduce childcare costs with a higher subsidy that will benefit more families. While these announcements are welcome, the increase in places and doubling of hours for early learning mean many more staff will need to be trained and employed. Even now, thousands of advertised positions need to be filled.

In particular, to meet the needs of all families in multicultural Australia, staff will have to be recruited from culturally and linguistically diverse populations.

Lack of diversity is a barrier for families

Many families from these groups are not using early childhood services. The result is poorer academic outcomes compared to English-speaking families, as our commentary this month in Australasian Journal of Early Childhood explained.

Research has also shown that having culturally diverse carers and teachers benefits children as they can identify with those who have similar backgrounds to develop their own identity. Children from the dominant culture benefit too. Seeing adults from different cultures co-operating and working together develops tolerance and cultural awareness.

However, many young children from different backgrounds find going from home care to childcare difficult. They are often unfamiliar with spoken English. They also struggle with differences in expectations from adults and playing with other children, as well as differences in cultural practices of eating and sleeping.

Parents from different cultural and linguistic backgrounds sometimes encounter difficulties finding places for their children. The expense of preschool is of course a major barrier for many refugee families. But they have also reported a lack of interpreters if needed to enrol their children and that preschools do not accept bilingualism.

What are the obstacles to a diverse workforce?

Thus, employing more diverse workers would seem logical. But there are difficulties to overcome.

At the moment, many culturally diverse childcare workers are unskilled. They are working in early childhood settings as their tertiary professional qualifications in other areas are not recognised in Australia.

However, the domestic enrolments of culturally and linguistically diverse student in higher education has increased as the percentage of the Australian population born overseas increases.

These students face many challenges. Educational practices are often very different from their country of origin so they can have difficulty navigating tertiary study. Some struggle with a lack of finances and friends.

These students unfortunately seem to fail their teaching practice more often than their Anglo-Australian peers when undertaking tertiary studies in early childhood teaching and care. It appears they have added struggles during the practicum or teaching experience required for their training. The students are often very worried about talking to parents of the children, what to say to them, parents speaking too fast for the student to understand and parents not understanding the student.

How can we increase the sector’s diversity?

There are many things, however, that we can do to help culturally and linguistically diverse students overcome such barriers and traumas. First, as in NSW, a program could be conducted for migrant and refugee children in years 9 to 11 to explain employment networks and help them make vocational choices.

Second, training programs for practicum supervisors can enhance the experience for the students as well as pre-practicum programs themselves. Students have appreciated support programs that improved their experience of placements.

However, paradoxically these programs try to have these students change to fit in, to be fixed to the Australian model. This approach implies they are the problem. Yet what we want to achieve by inclusive practices is diversity that better reflects Australian society today.

The most logical change would be for tertiary lecturers and trainers to teach in a culturally aware way to assist culturally and linguistically diverse students in both their tertiary education and in their practicum. Cultural awareness isn’t just language, food, dress and religious differences. There are deep cultural differences such as child-rearing practices, educational practices and concepts of beauty, modesty and justice.

To be culturally competent one needs to be aware of culture differences and have knowledge and skills that are demonstrated by one’s behaviour and attitude to teaching students from different cultural backgrounds.

Australia needs to promote and support an educated diverse workforce in early childhood education and care as acknowledged by the Productivity Commission. We should see diversity as a strength to attract and retain diverse workers by bridging courses and different career pathways.

This article is republished from The Conversation under a Creative Commons license. Read the original article.