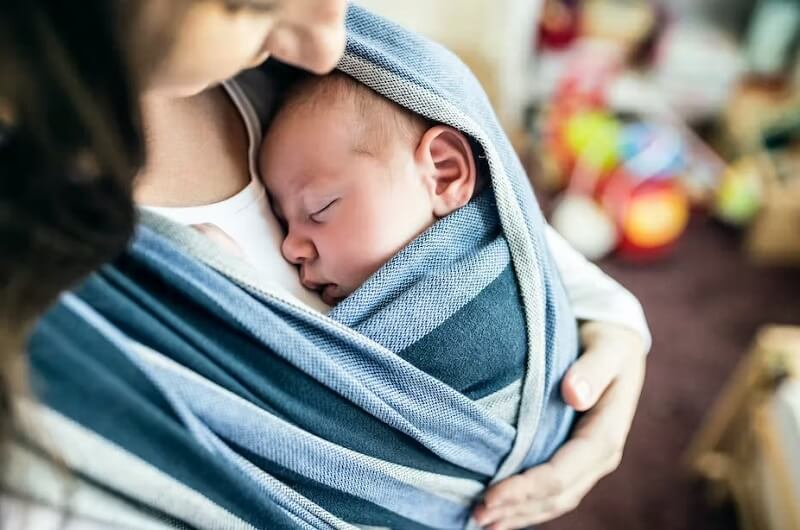 Written by Jeanine Young, University of the Sunshine Coast

Carrying babies in a soft fabric sling or carrier close to their parent or caregiver has been practised throughout the world for centuries. However, the recent inquest into the death of a three-week old baby boy in New South Wales has highlighted the potential risks of this valued aspect of infant care.

At least five babies across three Australian states have died during use of an infant sling or baby carrier since 2004. Case reports from Australia, France, Japan and the United States have also highlighted the risk of injuries and deaths associated with slings and carriers.

Although rare, these tragic deaths may have been preventable. There are protective strategies parents and caregivers can use to reduce the risk of accidents and fatalities.

Baby slings and carriers allow parents to “wear” their baby. First used in traditional societies, baby-wearing has increased in western societies in recent decades.
As with almost all infant care practices, there are benefits and risks.

Baby-wearing is convenient, helps to soothe and calm baby, and allows parents to pick up on infant feeding cues. It has been associated with improved maternal-infant bonding, increased breastfeeding duration and better infant neck muscle development.

However, adverse outcomes from incorrect use include hip dysplasia, falls, burns and suffocation.

Commonly used but not well-understood

In Australia, baby-wearing is very common. A study conducted in Queensland with over 3,300 parents with babies aged 3–4 months, found 87% of parents had used a sling or baby carrier in the first three months of their baby’s life. Over one third had used a sling or carrier for baby to sleep in.

But while 65% of parents said they had read about how to use slings, less than one in five had heard of about internationally agreed upon sling safety advice, known as the TICKS rules.

A variety of designs were being used by those studied, including front fabric wrap or structured baby carrier styles, over the shoulder styles, ring slings, and traditional slings. Several of these styles are not recommended for babies under four months.

These findings highlighted that many parents may not be aware of potential dangers from use of infant products that do not match their baby’s growth and development.

Suffocation is the likely cause in most deaths associated with slings and baby carriers. To understand the risks, we need to understand babies’ bodies and how they usually develop.

In particular, we need to know how babies breathe and how the environment they are in can make breathing difficult. Typically, this interaction is dynamic – it changes as a baby grows and develops.

It’s important to note babies can have difficulty with breathing without making any noise or movement.

Compared to older children, babies have smaller and more easily compressed airways. And they have a large, heavy head relative to their body size, with a protruding occiput (that bony bump on the back of their head) that tips the head forward even when lying on their back.

Babies prefer to breathe through their noses. They have less respiratory stamina (their ability to respond to reduced oxygen) and less ability to control their temperature, particularly if their head is covered.

The anatomy and physiology of babies younger than 12 months means they are vulnerable to suffocation in several specific ways.

4 ways a baby’s airway can be at risk

We need to think about the baby’s airway as a tube. It needs to remain open for oxygen to get to the lungs. Everyone who cares for young babies needs to be aware this tube may be

Any of these actions increase the risk of suffocation.

Babies under four months of age often lack the strength to move their heads to keep their airways clear. So if baby’s face is covered or pinched off by fabric or the wearer’s body, rapid suffocation can occur.

If baby is lying with a curved back in a C-position – such as in a baby capsule, sling or carrier – and the head is able to tip forward to chin-on-chest, their airway may bend. This too can result in reduced oxygen and slow suffocation.

Finally, if there is pressure on baby’s chest, such as when a carrier or sling is too tight around baby’s body, the infant might not be able to expand their chest to take deep enough breaths.

Babies born preterm, of low birth weight or those who are unwell need extra consideration and support to maintain a clear airway, compared to full term babies.

The TICKS checklist extends the idea of the airway as a tube that needs protecting. It is applicable to various circumstances such as infant car seats, bouncers and rockers, as well as slings and baby carriers. The five points promote safe baby-wearing by emphasising caregiver observation and optimal infant positioning to reduce suffocation risk. The baby should be positioned in a way that is

Product Safety Australia, Raising Children’s Network, and Red Nose have also published advice for parents who are considering slings or carriers for their baby.

Currently there are no Australian standards for the manufacture of baby carriers and slings, despite slings developed in other countries being available for purchase in Australia.

This article is republished from The Conversation under a Creative Commons license. Read the original article.